I’m happy to announce after a year of work we finally have the tiny house finished and moved to its final location. The house was built for my parents to use as a tiny vacation house (a step up from the decrepit parked camper we had all previously crammed into). We moved it about 300 miles south to the Ozarks to stay a little piece of woods in the foothills.

Handmade ladder that slides over for access to larger loft 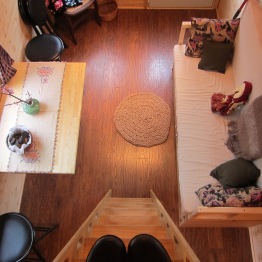 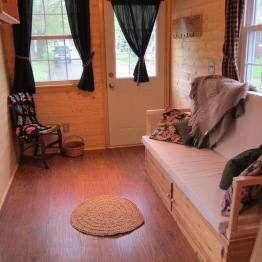 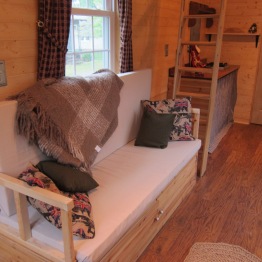 Couch folded out to make a bed 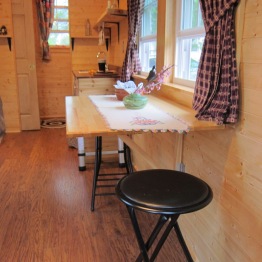 Fold down table with 4 folding stools

One of the two lofts

After putting in most of the final touches (we’re waiting to install solar, hook up water and figure out a solution for waste water), we hosted a tiny open house. At the busiest we had 10 people inside the roughly 160 sq. ft. house. After building it in my parents’ backyard our first hurdle was to haul it to the street for the open house. We had dreaded this part the whole time building it because the alley was narrow, the backyard fenced in and the path riddle with power lines and low hanging branches. After cutting down a section of the fence, the tiny house sprang to life with ease, rolling down the alley to stop on the street in front of the big house. Aside from curbing the tires and hitting the neighbor’s tree, the first part went as smoothly as possible.

The next day we hitched up the truck and loaded up a second vehicle to lead and watch for low power lines, street lights, bridges etc. Every step of the way, from their little street into town, from town out to the highway, from the highway to the interstate and forward to the mountains, we crossed off every obstacle we thought we might encounter. Later we shared the fears we’d had (the house falling off the trailer, the house capsizing, the roof being ripped away by a low bridge, a tire off the road sending us into a ditch, etc) and laughed when nothing terrible happened.

After about 7 hours of driving we got it to the final location. About a year ago we’d had someone clear off a section of woods and lay down gravel for the house. We pulled the house onto the spot we’d cleared. It only took two tries, which is amazing given that we had to make a turn over a 10 foot wide culvert with an 8 foot wide trailer. After the house was parked and everyone had let out a sigh of relief, my dad, who had piloted the house managed to get stuck in about 3 feet of mud simply trying to get his truck back to the road. It just goes to show you that you can work on something for a solid year with no hangups and run into the least expected problem just trying to read the road again.

We were only able to stay for about 4 days as a mini work-cation. We worked to build a porch around the house and make it seem more like home. We got all of this accomplished in April and have had a chance to stay in it a few times since. It’s a tight fit but it’s so much nice than the camper we had used before. I’m looking forward to many more weekends spent down there, enjoying the fruits of our labor.